Iran Seeks to Expand Its Military Cooperation With China 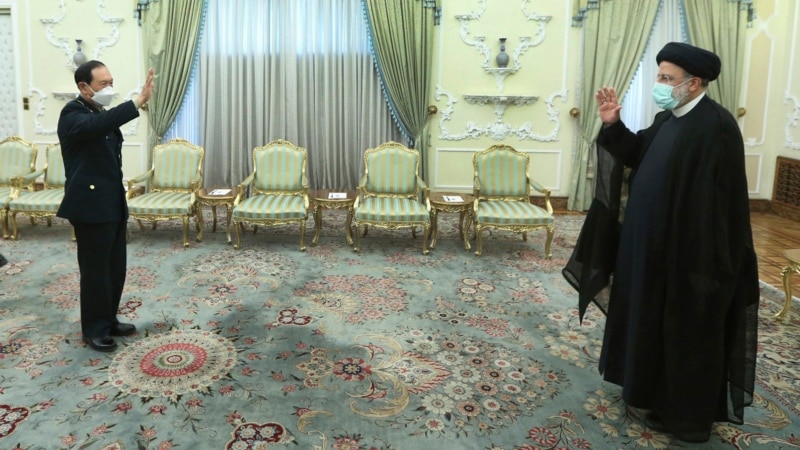 Iranian President Ebrahim Raisi expressed Wednesday his government’s desire for closer cooperation with China in remarks made during a visit by the Chinese defense minister, state media reported.

According to the report, Raisi told China’s Minister of National Defense Wei Fenghe that Tehran sees its ties with Beijing as strategic. Closer cooperation would serve to confront what the Iranian president described as U.S. unilateralism as talks to revive Tehran’s nuclear deal with world powers have stalled.

“Confronting unilateralism and creating stability and order is possible through cooperation of independent and like-minded powers,” Raisi was quoted as saying.

Wei in turn said improving ties between Iran and China would provide security, “particularly in the current critical and tense situation.”

Wei also met with his Iranian counterpart, Gen. Mohammad Reza Ashtinai, and reportedly invited him to visit China, as well as with other Iranian military officials.

The official IRNA news agency quoted Ashtiani as assailing U.S. military presence in the Middle East and elsewhere, claiming that “wherever the U.S. has had military presence, it has created waves of insecurity, instability, rifts, pessimism, war, destruction and displacement.”

Wei said his visit was aimed at “improving the strategic defense cooperation” between Iran and China — cooperation that he said would have a “remarkable” impact in defusing unilateralism and fighting terrorism.

Iran and China have increased their military ties in recent years, with their navies visiting each other’s ports and holding joint naval drills in the Indian Ocean.

In 2021, Iran and China signed a 25-year strategic cooperation agreement that covered a variety of economic activities from oil and mining to promoting industrial activity in Iran, as well as transportation and agricultural collaborations.

China is a signatory to the nuclear deal between Iran and world powers, along with Russia, Britain, France and Germany.

Previous articleHuzzah! You can finally get a Radeon RX 6600 XT for MSRP
Next articleGrowing younger: Radical insights into ageing could help us reverse it